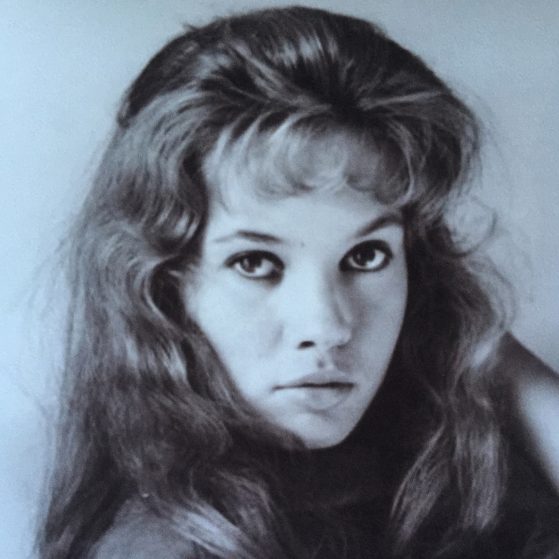 Gillian Hills releases her second single “Bluedress” from her forthcoming album, which will be released in the spring of 2019. Her first single “Nefer-titi” began her autobiographical music journey telling in her own words how she reflected upon the world around her at the tender age of eleven.

“Bluedress” continues that journey recounting her first love at the age of sixteen “with an amazing, charismatic French boy” and the love they shared before he “flew away” and that magical feeling of first love “lasting for life”. Gillian channels her emotions and conjures up those intense memories, sounds and feelings from that time in her life between the age of sixteen and nineteen and summing it all up in “Bluedress”.

Nefer-titi has had great supporter at radio from Mark Radcliffe and Stuart Maconie on their 6 Music shows. Also, Janice Long is a keen supporter and has recently recorded an incredible interview with Gillian as a guest on her BBC Wales evening show discussing Gillian’s life in film and music.

Gillian has had massive success with her song “Zou Bisou Bisou” which was chosen for the premier of the fifth season of the hit American TV series Mad Men (16 Emmy awards and 5 Golden Globes). She is currently in the studio working on her forthcoming album, which she is co-writing with producer Peter Vettese who has worked with Simple Minds,

Gillian was born in Cairo (5 June 1944) and is an English actress and singer.  She was discovered in France by legendary film director, screenwriter, Roger Vadim; the director of ‘And God Created Woman’ and ‘Barbarella’, who saw her as the next Brigitte Bardot and cast her in a version of ‘Les Liaisons Dangereuses’ (1959).

Gillian became a sixties film icon appearing in movies like ‘Beat Girl’, her first film at just 15, in England. ‘Beat Girl’ (1960) tells the story of a young rebellious teenager who spends her nights clubbing and dancing to rock & roll. This was John Barry’s first film score. Her co-star was a young Adam Faith and Oliver Reed in their first credited film roles. The British Board of Film Censors ordered cuts to be made before they would give it an X certificate. In 2016, the British Film Institute (B.F.I.) remastered ‘Beat Girl’ from the original negative and recorded an interview with Hills for the DVD release. Gillian played other key film roles in the classics ‘Blow Up’ (1966) and Stanley Kubrick’s ‘A Clockwork Orange’ (1971).

Gillian also spent a number of years living in France, where she embarked on a singing career as well as starring in a number of French films.  Quickly hailed as “the British Bardot,” Gillian lived between France and England. In 1960, she cut her first recordings with Henri Salvador, “Près De La Cascade” and “Cha Cha Stop”, for the French Barclay record label on an EP entitled “Allo Brigitte? Ne coupez pas!”

In 1961, she appeared at the Olympia Theatre in Paris on a bill with Johnny Hallyday.

In 1963, Serge Gainsbourg wrote his first duet for Gillian, “Une Petite Tasse D’anxiété”, which they sang together on the French TV show ‘Teuf Teuf’.

Gillian remained with the Barclay label until 1964, having released both cover versions and original self-penned recordings.

In 1965, she signed to the AZ Record Label run by the radio station Europe 1 and issued an EP that included a French cover of the Zombies “Leave Me Be” and her self-penned “Rien N’Est Changé”.

In 2008, her self-penned song “Qui a Su” was chosen for Jean-François Richet’s film “Mesrine Part One: Killer Instinct” with Vincent Cassel.

In 2012, “Zou Bisou Bisou” was chosen for the premier of the fifth season of the hit American TV series Mad Men (16 Emmy awards and 5 Golden Globes).

By the middle of the 1960’s Gillian had returned to England and film, appearing in  Michelangelo Antonioni’s first English language film ‘Blowup’ (1966), starring David Hemmings, with whom her character and that of Jane Birkin shared an energetic romp. ‘Blowup’ won the Grand Prix at 1967 Cannes Film Festival.

Next came a play by David Storey at The Royal Court Theatre, ‘The Restoration of Arnold Middleton’, director Robert Kidd, followed by the film version of John Osborne’s play ‘Inadmissible Evidence’ (1968), directed by Tony Page, in which she plays the part of Joy.

Gillian appears in writer James Salter’s only film as a director, a mystery romance Three (1969). She also starred as Alison in ‘The Owl Service’ (1969), a television adaptation of the Alan Garner novel.

1970, Georges Franju chose her to play the part of Albine opposite Francis Huster in ‘La Faute de l’abbé Mouret’, adapted from a novel by Émile Zola.

Other film appearances followed, including a cameo in Stanley Kubrick’s ‘A Clockwork Orange’ (1971), in which she played one of two girls picked up in a record shop by Alex (Malcolm McDowell). She replaced Marianne Faithfull in the 1972 horror Demons of the Mind for Hammer Film Productions.

In 1972, Gillian decided to stop making films. She moved to New York to work as a book and magazine illustrator. Her first book cover was Alice Munro’s ‘Lives of Girls and Women’; her last book cover was for Alice Walker’s ‘The Colour Purple’, published by Washington Press

Some more info on Gillian:

Julian Lennon considers himself a fan:

Alexa Chung is also a fan: